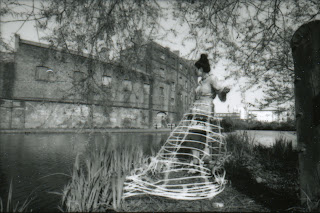 by: Lucie Hepton
Artist and photographer Minnie Weisz’ most recent exhibition explores ’s Kings Cross, in collaboration with costume and set designer Caroline Collinge. The show is at Minnie Weisz’ studio, which is situated under a Victorian Arch on .
The work focuses on the architecture of Kings Cross, photographing the abandoned and derelict remains of Victorian buildings and in turn revealing stories from its history. The exhibition builds on Weisz’ fascination with the past, a feature of many of her recent works. Including revisiting the now demolished Culross building with an ex-resident to hear his memories. This is the first fine art exhibition for Caroline Collinge, and the first collaboration between the two artists.
Throughout the works on display there are continuous references to bones and teeth, with skeleton-like structures reflecting the carcass of Victorian Kings Cross and the memories within. Collinge explores a range of materials, including paper folding using old maps and pages from books, shaping them into costume, forms and structures using origami techniques as well as a large-scale crinoline bone. Both artists describe their collaboration as a natural meeting of vision and understanding. The derelict areas they explored could have seemed unwelcoming, but the two artists developed and produced a fantasy impression of what might have otherwise become an impersonal tour of abandoned spaces.
Each night throughout the exhibition films will be shown in the window of the Minnie Weisz gallery for the “stray dogs, passersby and streetwalkers” that roam Kings Cross. The opening night reception featured a reading by visionary writer Aidan Andrew Dun, known as the Poet of Kings Cross. He read from Vale Royal (1995), a verse poem in two cycles and a haunting narrative that seems to grasp the core of , which he claimed took him 23 years of consideration. The poet, who had the appearance of a Rolling Stone type rock star, tapped his foot to the beat of his literature as the audience stood mesmerised with the story. It was the fitting experience for a reflective evening, and the exhibition was an appropriate tribute to the long history and bright future of Kings Cross.
The display was part of the Reveal festival, a ten day series of events and exhibitions in and around the Kings Cross area. 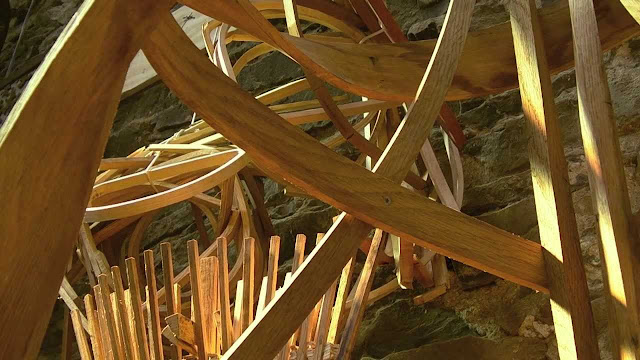 Edmond Salter is one half of Cabinet of Curiosity Studio. He is currently a recipient of an Arts Council England Developing Your Creative Practice grant to enable time and space during 2021 to research, experiment and enhance his craft by exploring timber techniques, technologies and fabrication processes that can be used to create artworks. This has included undertaking a recent professional training in steam bending wood techniques at the Charlie Whinney Studio in Cumbria.  I have recently completed an extended weekend course which demonstrated the magic of steam bending from the miniature to the monumental. The Charlie Whinney Studio exists to 'explore the relationships between materials, people and the environment – and sometimes find where beauty and usefulness meet. The studio researches the existing methodology of steam-bending as well as developing cutting-edge processes, innovations and ideas to facilitate new work. Charlie believes it is essential to spread knowledge of

A pop-up exhibition by Cabinet of Curiosity Studio celebrates the architecture of the North East through large scale kirigami pop-up paper models and construction toys of 10 landmarks The exhibition marks the culmination of the ‘Grand Constructions’ arts project that took place online and in-person during 2021. As the project was a public realm commission for Creative Darlington, the exhibition has been situated in a vacant shop space in the Queen Street Shopping Centre as opposed to a conventional art space. In doing this we hope to help the regeneration of the high street, by animating an empty space, as well as attracting an audience for the work who may not usually engage with the arts. The decision to exhibit work on the high street was also informed by working during the pandemic, when traditional art venues and museums had to close to the public. Exhibiting in shop window spaces reduces the risk of our exhibition not being accessible to a live audience. In considering how to exh 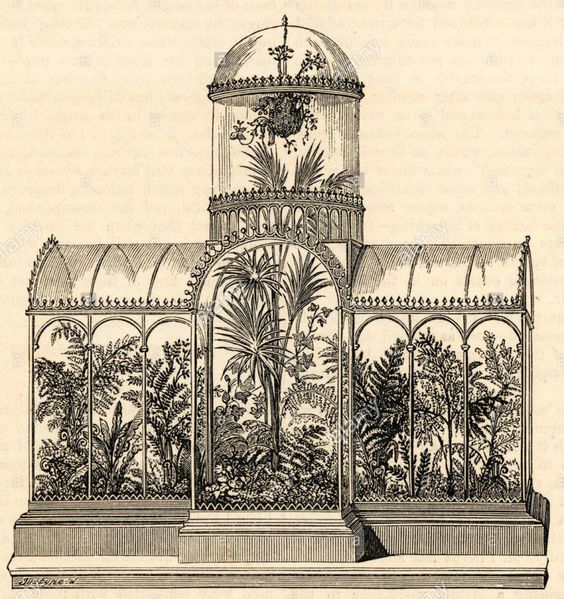 Cabinet of Curiosity Studio are amongst five artists who have been commissioned to create new work for an exciting and ambitious project focused on clean air and sustainable living in the Tees Valley. Viewpoints will include sculptures, installations and artworks displayed across the Tees Valley during the run up to the Festival of Thrift weekend. We will be creating an architectural installation 'Green House' that will showcase contemporary fabrication techniques using materials that reduce toxicity in the home and will contain a living environment of plants that possess the most effective air cleaning properties. Victorian Wardian Case Our Green House installation will be located within Darlington Market, a Victorian covered market designed by architect Alfred Waterhouse, designer of the Natural History Museum in London. The  design process for this commission has involved researching garden architecture of the Victorian era, with a focus on greenhouses,